I am William Jonathan Keith. I am the author of this web page. I am the only trombone-playing Physics and Math major in the '99 alumni class of the University of Texas Longhorn Band, the Showband of the Southwest. I am the only Texan grad student in math here at Pennsylvania State University. I am one of many American mutts, part Dutch(maybe German), part Irish, and part Cherokee and maybe Choctaw, because I am the oldest son of my mother, who I am reasonably sure is a descendant of Cornelius Beaver, someone I would like to know more about. I am the owner of a stuffed puppy named Brownie who sits on top of my TV. I am a fan of anime, The Daily Show, and The West Wing. I am the kind of guy who will confess to doing something wrong even if I know I won't get caught. I am 5'9", and have good posture from being a proud person and marching with a trombone for seven years. I have green eyes, brown hair, glasses, more weight than I should, and a remarkable facility for being remembered by people whom I haven't the faintest clue as to the identity of(perhaps I've met YOU). I am one of the many people who has shaken the hand of a President, spoken personally to my Congressional Representative, and taken a picture with my Governor, but possibly the only one who discussed politics with my State Legislature Representative to fulfill a Boy Scout merit badge requirement while he was first campaigning. I am single and looking, and determined to show natural selection who's boss. I am the owner of a sense of humor which is pretty peculiar but keeps me laughing enough at strange or subtle situations to stay happy. I am the writer of a number of amateur short stories, some of which are in production, some virtually abandoned, and some of which are on the Web or otherwise stored under various names.

To you, I am what I do that affects you.

Maybe I can tell you some of what I think, so that you can know who I think I am. A little, anyway.

I exist as a delineated portion of a larger world that includes my environment and other people. These people experience a similar condition, with individual viewpoints. These viewpoints differ from my own but perceive the same world: if we define measurable characteristics of the world and independently engage in such measurement, then communicate truthfully to each other, we will learn that our findings comport well, producing agreed-upon facts.

...that reality is irrespective of belief.

Truth must be respected, because it will not placidly conform itself when I am in error. Being not all-knowing, I understand that the world exists beyond and in some ways in contravention of my impressions. These facts give me the opportunity to grow by investigation and to improve by correction. The twin motivations give rise to attitudes of scientific inquiry and self-reflection, lacking either of which would stunt my existence at the root.

...that reality is understandable.

The experiences I and other collect can be organized systematically. This organization expands my existence by allowing my understanding to encompass reality beyond my personal experience communicated to me by others, and allowing me to communicate my experience to others as well. In this enterprise, trust is important: error should be sought and corrected, and those involved must adhere to the truth. I should strive to remain trustworthy. Readily extending trust rapidly expands the experiences available to me, a significant benefit which means I should rescind trust only with significant proof of the need.

...that reality is amenable to action.

I am part of the world. My actions affect it in generally predictable ways. I thus have the capability to change the world. I do so quantitatively with every action I undertake, and opportunities exist for me to drive qualitative change on a variety of scales. These changes are most beneficial to myself and others when based on an accurate understanding of the world and shaped by careful consideration. Changes beneficial to myself and not to others are so rare as to merit extreme caution before undertaking such actions.

On more specific issues, I think:

Oh, did you want to know what I look like? Well, what does that have to do with who I am? [chuckle] Actually, I'm well aware of how much it has to do with that. So here you go: 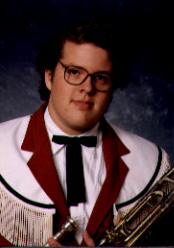